Epping Forest District Museum has a long standing reputation for its touring exhibitions and has produced over twelve in the past ten years. The programme began in 2002/2003 with our very first production, Welcome to Brambly Hedge, which displayed the work of the Epping author, Jill Barklem. Brambly Hedge is still popular with venues today and has recently been hired out to Mansfield Museum in Nottinghamshire.

Since Brambly Hedge, the exhibitions programme has received various streams of funding from a variety of official bodies. All exhibitions have toured the East of England and beyond, creating support networks and partnerships which have increased the sustainability and resilience of the sector in the region. Most importantly, it has allowed smaller museums with limited resources the opportunity to have changing displays, encouraging repeat visitors.

In 2013, the touring exhibitions programme was renewed with further funding from Arts Council England. This provided the programme with enough resources for the production of a further six touring exhibitions which were to be created over a period of two years. The funding also allowed for the opening of a new post within the museum team and our Touring Exhibitions Assistant joined us in August 2013.

Ready and raring to go, the first exhibition of the new series, 1950s Fashion: A Decade of Glamour launched at Harlow Time Machine Galleries in October 2014. Showcasing stunning collections from around the East of England, this exhibition features a fully working jukebox, a vintage dress up rail and a bespoke Teddy Boy Suit. 1950s Fashion was a huge hit with all ages and received fantastic feedback. Hiring venues seemed to like it too and the exhibition is now been booked until Summer 2015.

Coming straight after this, Response and Rescue: The Making of the Emergency Services was launched in March 2014. From Victorian volunteer fire brigades to today’s dedicated coastguard crews, the exhibition tells the story of the creation and development of the emergency services. With a special emphasis on emergency services in the East of England, the exhibition also includes an audio tour of collected objects and stories from the region. Response and Rescue is due to close at Harlow Time Machine Galleries on the 28th July (so still time to see it!) and begins its tour of the region with the RNLI Henry Blogg Museum in August. 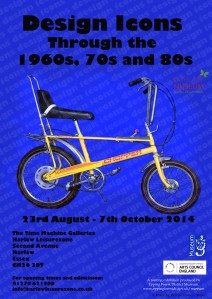 Currently in production, Design Icons: Through the 1960s, 70s and 80s, is the programme’s biggest exhibition yet. Set to launch on August 23rd 2014, this exhibitions is curated by two students from Herts Regional College as part of the museum’s Young Curators programme (which has further funding from Royal Opera House Bridges). Made by young people for young people, the exhibition is set to be an exciting and dynamic display, with Icons such as the Rayleigh Chopper, Mary Quant Fashions and Nintendo Gameboy stealing the show. Accompanying the exhibition is a series of workshops, from photography to film making, these are designed to engage and interest teenagers in the creative arts and their heritage.

With another jam packed 12 months lying ahead of us, we have little time to reflect on the past year. In 2014/15, we will produce another three exhibitions, with one curated and created by students at Epping Forest College.

For any more information on our current touring exhibitions, where you can see them and how you can hire them please: