James Paul Andre the Younger was a London based artist, active between the years 1823 and 1867. He painted landscapes of many English counties in oil. His work was exhibited at the Royal Academy, Suffolk Street Gallery and the British Institution. Among some of his listed works are views of Woodford Bridge, Loughton Church and Hainault Forest.

Below is a selection of images from an album of works by Andre in the museum’s collection.

The Windmill at Chigwell Row 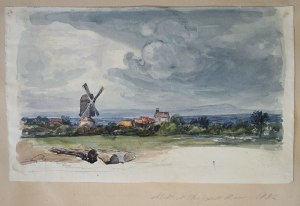 This Windmill stood about 270 yards south-east from the south side of Lambourne Road opposite the junction with Vicarage Lane. The first mill here was erected in about 1610. The mill was struck by lightning in 1842 and burned down.

The James-Paul André album of watercolours shows four views of the windmill, three of the mill and its immediate surrounding area, and a fourth from a distance, possibly painted from near the top of Manor Road at the junction of Hainault Road and Fencepiece Road.

For over six hundred years Hainault Forest was part of Waltham Forest. All this changed in 1851 when an Act of Parliament was passed for the disafforestation of Hainault Forest, and this led to the destruction of 100,000 oak, hornbeam and other trees. The cleared land was sold for farms. A little woodland remained to the north of the King’s Wood, mostly in Chigwell and Lambourne parishes. However, by 1900 the bulk of the remaining woodland was in the private ownership of the Lockwood family of Bishops Hall, at Lambourne. Edward North Buxton, who had played a key part in the fight to save Epping Forest in the 1870s, could see the need to secure the last remnants of Hainault Forest as an open space for the public. In 1902 he persuaded the London County Council to purchase 801 acres of land formerly Hainault Forest in Lambourne and Chigwell and Foxburrows Farm. The ‘new’ Hainault Forest which exists today was formally dedicated as a public open space in July 1906.

The Eagle Pond at Snaresbrook is an ancient pond that is shown on maps surveyed in 1773 (Chapman & André) and 1745 (Rocque). It was formed in the early eighteenth century by damming the valley of the ‘Snares Brook’ and was at that time called ‘Snares Pond’. It adjoins the Snaresbrook Road that runs west from the Eagle Hotel, once a coaching inn on the main Woodford Road from London to Newmarket until 1829.

The watercolour painted by James Paul André in 1839, shows the pond from the west end. In the distance can be seen the Eagle Inn. Today the east end of the pond is shrouded with trees but the Inn can still be seen directly opposite the end of the Snaresbrook Road. The Royal Infant Orphanage was yet to be built at the time the picture was painted.

The picture shows the head of a lane, descending into a valley, and in the distance a substantial mansion with a red-tiled roof. The most likely location from which André painted this picture is at Rolls Corner on the Chigwell to Abridge Road, looking down Chigwell Lane. The house in the picture may be the artist’s impression of Loughton Hall which had been burned down in 1836, and which was not replaced until 1876.