Hear from Emma Anderson (nee Hollis) in her own words.

“If it doesn’t work the first time, try again. Find a way or make a way,” I hear myself say to my class of Year 6 children who struggle to assemble moon buggies from mountains of cereals boxes and empty drinks bottles.

During my time at Chigwell, these words were just a mere school motto, yet it was only in my post-Chigwell years that I found their true meaning. They resound through my academic, professional, and sporting careers. I believe that it was the resilience and determination that I developed during my nine years at Chigwell that have led me to where I am today, having accomplished dreams, but also overcome heartache.

Both my brother, James, and I have Osteogenesis Imperfecta; more commonly known as Brittle Bones. Growing up, we both found participating in the majority of sports difficult due to the strain these activities put upon our bones. A broken bone was a regular occurrence for us and we were often in school on crutches or in a sling. I entered the Junior School swimming gala in 2002 as I loved the water. I found that I did have some sporting prowess and could compete with my peers on a level playing field. I was determined to show my peers and teachers that although I was slow on the track, I had what it took to be an athlete in the pool – and that there were some fast-twitch muscles in there somewhere! From this moment on, I found my way into a swimming career that would last over a decade and take me all over the world.

In 2008, whilst studying for my GCSEs, I competed in one of my first Para-Swimming international meets. It was during this meet that I broke my first British Record in the 100 metres breaststroke; it wasn’t until after that I found out that I had missed the Beijing 2008 Paralympics qualifying time by less than a second. I was thrilled with my performance, and missing the qualifying time just made me even more determined to represent Team GB on the world stage.

Competing in the 100m Breaststroke in Reykjavik, 2009

My determination paid off and in 2009, I was selected in represent Team GB in the European Championships in Iceland. Much to my own surprise, I won a silver, and three bronze medals, and re-broke my own British Records. However these swimming successes came at a crucial point in my academic career: I was completing my A-Levels and had dreams of studying geography a top university after Iceland’s scenery had stolen my heart. Many had told me that I would have to choose between the two, yet it was a few influential teachers that told me I could still achieve both. Aut viam inveniam aut faciam. I decided to find my way, the Emma Hollis way!

The Emma Hollis way involved heading off to Loughborough University with 3As at A-Level under my belt and enrolling in the world renown Loughborough Swimming programme. I was the first Para-Swimmer to swim under Loughborough for many years and there were many within the swimming world who thought this move would end my swimming career. However, after that first firm handshake (another thing I was always taught to do whilst at Chigwell!) with my coach, Ian Armiger, I knew this was the programme for me.

Chigwell prepared me for life in university perfectly in terms of time management: I managed to study my BSc in Geography, swim like I’ve never swum before, alongside holding down a part time job in the Student’s Union. I took part in field work in Crete, the Peak District and Snowdonia and also went on training camps to the Canary Islands, Mallorca, Berlin, and sunny Manchester.

Swimming under the Loughborough programme went from strength to strength; I was named top female Para-swimmer at the BUCS (British Universities and College Sport) on several occasions and won 3 bronze and 2 silver medals at the 2011 European Championships in Berlin. My time at Chigwell taught me to always strive for better: I always wanted to push myself to see what I could achieve. This could explain where I found the strength from in the last 50 metres of the 200m Individual Medley in Berlin to touch out my 6 foot tall German rival for the silver medal by 0.02 of a second. Later on that year, I went on to break the S8 800m freestyle and SM8 400m Individual Medley world records. 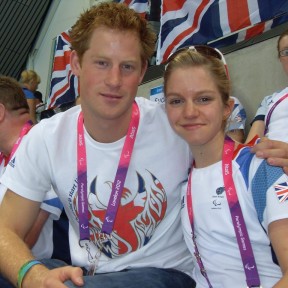 2012 was always going to be an exciting year. I was swimming well and the London Paralympic Games were just round the corner. I qualified in March, and then after another meet in April, my place on the Paralympics GB team was confirmed. This was it; the pinnacle of my sporting career. The plan was to swim well in London, then retire to focus on my final year at university. As August came upon us, I was in top form and had never swum so well. Everything was going just to plan and my aim was to make the finals of my four events. The buzz of the Athlete’s Village in Stratford would be enough to spur anyone into action, but having my flat overlook the stadium was the cherry on the cake. As I took in the atmosphere walking through the village on my way to training on the day of the Opening Ceremony, I slipped off a kerb. At first, I looked at the blood seeping out my grazed knee, and then I noticed a deep throbbing pain in my ankle. I was rushed to the medical building and I was diagnosed with not only a broken ankle, but also a dislocated elbow. Instead of spending the days leading up to my race doing final preparation in the pool or relaxing in the village, I was under an MRI machine for hours on end, or having fluid drained off my joints that resembled grapefruits. Not the preparation I was hoping for, but I was determined to compete.

After racing at the 2012 Paralympic Games – moon boot and all!

Race day arrived and at 5.00am, I was in the medical building having a local anaesthetic in the lower part of my right leg. Then I was ready to race. This procedure occurred for each of my events, and in each event, I finished last. Not the result I was looking for.

The Games came and went, and soon, all of this became a distant memory. I went back to university to complete my final year, and, despite what I had always said about retiring from swimming, I began to train again. My coach, Ian Armiger, had moved to the Cayman Islands and had invited me out to join him and travel around the islands to give motivational talks as part of the Caribbean’s Honouring Women’s Month.  Despite having a great time in the Caribbean and training well under the tropical sunshine, my injuries had taken their toll, and it took a lot longer than I thought to overcome them both physically and mentally. I decided to continue to swim until I graduated, and in my final competition, I finished with a number of personal best times. I finally felt that I had done myself justice and that my job was done. Anyway, retiring at 21 sounds great, doesn’t it?!

After graduating, I joined the working world and worked as part of a 2012 legacy charity that aimed to get young people out of gangs and into sports. I again had to call upon many of my life lessons I had learnt at Chigwell in terms of networking and public speaking. I enjoyed the job for a short time, but decided that working in an office was definitely not for me and I applied for a PGCE.

Into to the real world!

Four years later and I’m in my own classroom, trying to not only get my 30 year sixes ready for SATS in the Spring, but also trying to round them into determined, independent, responsibly and resilient young people who are ready for whatever this world throws at them. After all, this is what my time at Chigwell did for me and I want to continue this legacy. I will always look back at my time at Chigwell affectionately, with pride and gratitude, and have learnt that there is nothing you can’t achieve with a bit of motivation, a firm handshake, and a sense of humour.