We’ve come across some fascinating stories while researching our new school workshop, Local Legends, telling the stories of some important local people… 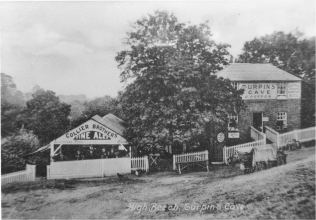 Did you know that the notorious highwayman, Dick Turpin, was said to have lived in a “cave” at Loughton Camp, Epping Forest at the height of his criminal activities? In 1735, with his accomplices in the Gregory Gang, Turpin is believed to have broken into Traps Hill Farm in Loughton, the home of an elderly widow named Shelley.

When Shelley refused to reveal where her money was hidden, the gang apparently threatened to roast her over a fire. The threat prompted her terrified son to say where their valuables were hidden. The gang found £100, which was a fortune at the time, a silver tankard and some other household items. Rather than making a quick getaway though, the gang made themselves at home, cooking up some supper, drinking beer and wine from the cellar and popping next door to rob the neighbour while their victims looked on:

“They afterwards went into the cellar and drank several bottles of ale and wine, and broiled some meat, ate the relicts of a fillet of veal … and then they all went off, taking two of the farmer’s horses, to carry off their luggage…” – Read’s Weekly Journal, 8 February 1735

Following the incident, worried residents of Loughton, which in those days was a small village in the forest, installed ‘Turpin traps’ in their homes to protect themselves. These were heavy wooden flaps that could be let down to block the stairs, and were wedged in place with a pole. These traps remained in some homes for decades – apparently people living in the 1890s could still remember local homes having them.

Turpin themed ornaments were popular for many years as the legend of Dick Turpin grew. He was seen romantically by some as another Robin Hood – but although an important figure in our local history, sadly all the evidence points to Dick Turpin as being nothing more than a ruthless criminal.