Staff from Epping Forest District Museum, Waltham Abbey and Lowewood Museum, Hoddesdon attended The National Service of Thanksgiving at Westminster Abbey on 11 November 2018, commemorating the 100th anniversary of the Armistice, having been invited by the Heritage Lottery Fund (HLF).

The Department for Digital, Media and Sport asked HLF to nominate people to attend the service, after recognising the huge contribution HLF and its First World War projects have made to the centenary. As a result over 300 people involved with these project across the UK, attended the service on Sunday.

Our centenary projects were made possible by grants totalling £124,000 from HLF, which distributes the heritage share of National Lottery funding, supporting a wide variety of projects across the UK. HLF has invested £97million in 2,200 First World War centenary projects.

The Walter Spradbery, Artist in War and Peace exhibition is on display at Epping Forest District Museum until Saturday 22 December 2018. It focuses on the artist’s time in the Royal Army Medical Corps during the First World War, and the paintings he made for the first Imperial War Museum displays.

Stephen Warner, One Man’s Journey through War was on display at Lowewood Museum from May until September 2018. It explored the First War World through the diaries of Warner, who served with the Royal Army Medical Corps and the Essex Regiment in France and went on to win a Military Cross for bravery.

Broxbourne: We Will Remember Them, focuses on First World War soldiers from the Borough of Broxbourne. People are invited to share their stories, memories, photographs and other artefacts. Pupils from local schools will create embroidered postcards to commemorate the sacrifices given by soldiers. There will be a number of sharing days in the Borough of Broxbourne, through December to February, for people to come and tell their stories. The Broxbourne: We Will Remember Them display will start touring from the end of February 2019.

For the first time in nearly 100 years, some of the art that was originally created for the first Imperial War Museum exhibition at the Crystal Palace is on show again at Epping Forest District Museum in Waltham Abbey.

Shortly after the Armistice in 1918, several artists were commissioned to create art for the Army Medical Gallery in the exhibition.  Among these were local artists, Walter Spradbery and Haydn Mackey.  Both were pacifists so had signed up to serve in the Royal Army Medical Corps at the outbreak of war.  Their role would be to save life rather than take it but they were at no less risk of danger and death, receiving medals for their bravery in rescuing comrades under intense enemy fire.

Spradbery tended to paint more landscapes and the effect of light.  This image of the Somme in April 1918 contrasts with the scenes we usually associate with the area – muddy, war torn battlefields.

Their experience meant they were able to create very strong paintings of their time on the front line.  Spradbery’s watercolours showed the effects of war on the landscape, while Mackey produced some monumental portraits of soldiers, praised at the time as being ‘a most powerful and truthful portrayal of the conditions of modern war, eloquent in persuasion against a recurrence of such things.’

This is Spradbery’s painting of the Imperial War Museum display at the Crystal Palace.  This was the museum’s first exhibition.  Spradbery and Mackey were commissioned to create art for the displays, but this is possibly one of the only paintings of the exhibition itself.  The exhibition opened in 1920 and closed in 1924.  4 million people came to see it.

The Great War exhibition opened at the Crystal Palace on 9 June 1920.  Its purpose was to record the ‘toil and sacrifice’ of Britain and the Empire in the Great War.  The building was crammed with displays of artwork, weapons, models, uniforms, photographs and all manner of things connected with the war. By 1924 four million people had seen the exhibition.

When the exhibition closed some of the art remained in the collections of the Imperial War Museum when it moved to its new location.  Others were transferred to the Wellcome Trust.  Sketches that Spradbery made for the exhibition works are now in the collections of Epping Forest District Museum.  As part of the special exhibition, ‘Walter Spradbery, Artist in War and Peace’, reproductions of some of the art including Mackey’s monumental works can be seen hanging alongside loans from the Imperial War Museum to recreate this incredible display of art and the role it played in recording the memory of the Great War for generations to come. 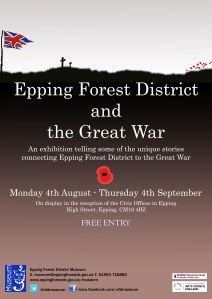 Epping Forest District Museum was one of the Museums selected to receive funding and be part of the SHARE Museums East Community Cabinet project. The ‘Community Cabinet’ is an invitation to members of the public and community groups to curate a single, dedicated cabinet with objects of their own choice. Objects may come from their own lives and ‘collections’ or from the museum’s vast array of objects.

Our first project was working to help document the links between Epping Forest District and World War One. As part of the project the team have been going out and about into the district, holding Heritage Events in various venues to allow people to share their stories with us. The objects have been recorded and stories documented and these records will become part of the Museum’s collection.

The objects and stories discovered have now come together as the museum’s first community cabinet display. These unique and unheard stories feature in a free temporary exhibition at the Civic Offices in Epping High Street from 4th August to 4th September 2014. 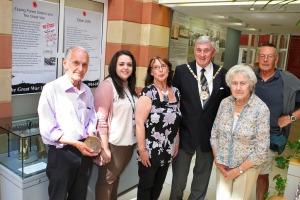 The exhibition was opened on Monday 4th August by the Chairman of the Council, Tony Boyce, who also met invited guests who had loaned objects to be part of the display.

Here are some photographs of the exhibition. 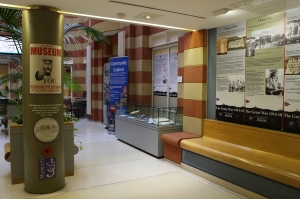 If you have a collection or might be interested in putting on a display in our community cabinet then get in touch with the museum: