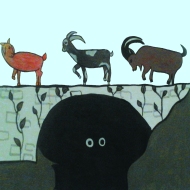 The Elf and the Shoemaker

From the dawn of human history, stories have been filled with tales of strange and mysterious beasts. The product of fantasy, dreams and imagination, these mythical creatures are often invented to explain strange events and can take the form of gods, omens or heroes. Taking you on a journey from the ocean’s depths to the mountain’s peaks, Epping Forest District Museum’s new exhibition, Mythical Creatures, explores the provenance of mythical creatures from around the world, delving into the fantastical stories that explain their existence.

The exhibition is divided onto four main sections, Earth, Wind, Water and Fire, as, according to the Swiss Alchemist Paracelsus, mythical beings draw their spirit from these four universal elements. Using Paracelsus’ theory of the elementals as building blocks, the exhibition weaves the tales of new and old together to create a rich tapestry of mythical beasts.

Although produced by Epping Forest District Museum, Mythical Creatures has been curated by Art students from Epping Forest College as part of the museum’s Young Curators Programme. Inspired by the stories and legends, these students have crafted a series of original artworks that feature their own interpretations of mythical creatures. Visitors can marvel at these artworks that range from a giant origami Nidhogg Dragon to chilling photographs of a modern medusa.

The exhibition launches at Epping Forest College on the 13th April 2015 and in the lead up to the opening, we will be posting fun facts on our social media outlets to see just how much you know about the enchanting world of mythical creatures. Follow us on Twitter and Facebook to discover the link between a narwhal whale and Elizabeth I or what rhyme you must recite to vanquish a suspected changeling fairy from your home.

Its time to suspend your disbelief as in here, they do exist…

If you would like to be added to our Private View Invitation list please get in touch by:
Email – museum@eppingforestdc.gov.uk
Telephone – 01992 716882